Skip to primary content
This is the home to a series of publishing experiments. Me (Baldur) and my sister (Jenný) have joined forces in making books we hope you will find interesting. 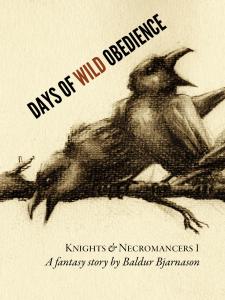 Some of you may know us from the work we’ve done separately. I’ve been heavily involved in ebook discussion, production and research. My sister has been painting and illustrating children’s books in Iceland. We’ve been planning for a long time to do some projects together.

The first of these experiments is Heartpunk, specifically a series of six novellas called Knights and Necromancers. Jenný does the covers. I do the text, ebook design, and web stuff. It’s fiction. Pulp-ish sword and sorcery. Should be fun.

After that we’re working on a series of annotated public domain books. Which should, hopefully, also be fun.

There are a few common threads that seem to run through most self-publishing projects. Most of the conversations are dominated by a limited palette of voices.

Some sit in near total silence, push out their books without any notice, almost as if the writer was embarrassed by what they’re doing or is so fearful of failure that they try everything they can not to draw attention. They’re then incredibly surprised at whatever it is that happens after that, success or failure.

Some are blatantly delusional, out to conquer the world, revolutionaries railing against the publishing world.

Some have dropped out of the more traditional publishing world, for whatever reason, and use self-publishing as a reason to rant about the world they’ve left, much like an divorcee dropping into a rant about ‘the new husband’ in the middle of a conversation on baked beans on toast (with cheese, or without).

Most of the time, discussions on self-publishing use it as a proxy for whatever hangups the discussers have about… well, anything. The actual subject can be as wide-ranging as health insurance, capitalism, networking, and grammar but people constantly make a mockery of these worthwhile subjects by masking them as discussions on self-publishing. In the same way, nobody ever actually talks about DRM but use it as a proxy for ‘piracy’ or ‘sharing’ (if they did actually discuss DRM, they’d be agin’ it, because its lack of ROI is empirically measurable in and of itself, for better or for worse, we live in a capitalist society that only does things that don’t have a provable ROI when overridden by ideology, religion, or sex, so any supporter of DRM is a bad, bad, capitalist). Self-publishing isn’t a subject but a shibboleth where the responses are used to categorise, brand, and segregate people into various camps depending on what the actual underlying subject is at the time.

As it turns out, if you do your research, a lot of self-publishers don’t talk about self-publishing at all. They talk about books, stories, ideas, aesthetics, design, genres, people—stuff that’s, y’know, actually fun. They are artists. They have a craft. And the craft is the only thing that matters.

Upton Sinclair liked to say that “it is difficult to get a man to understand something, when his salary depends upon his not understanding it”.

The problem with that quote is that it’s a glib way of dismissing the cognitive dissonance people experience when the conditions and context of their employment contradict the facts of the matter. People are very good at rationalising their actions and so become exceptional at figuring out reasons why this or that uncomfortable fact doesn’t really apply to them, just to others, or how that uncomfortable fact isn’t actually a fact because the presenter of said fact isn’t from within the industry and so doesn’t know better.

If you only do work in one part of a chain, the limited view you have of the overall field begins to – in your mind – define the entire field. The programmer thinks about the entire industry in terms of code, the web worker in terms of the web, the marketer in terms of promotion and marketing, and the designer in terms of visuals. Pars pro toto. Nobody is thinking holistically about what problem the company is solving for the customer.

Self-publishing is a chance to do exactly that: think holistically about what problem it is that publishing solves.

One of the big mistakes pundits make is in trying to understand self-publishing in the same terms as they understand larger publishing. They aren’t the same beast at all. Not even of the same genus. They solve the same problem for the reader but do so by generally different means. They are fundamentally different species.

Self-publishing is a craft, an art of workmanship where a single individual takes responsibility of every aspect of the product. It is to publishing what woodworking is to Ikea. As a craft, its output is considerably more varied and, well, odder than what you get from the multi-stage, multi-employee, pipeline that is modern publishing. As a craft, its output is a truer representation of the author’s personality than a polished bestseller from the big six.

Buying handmade furniture isn’t a practical decision. For almost any scenario you can imagine, a mass produced Kaustby chair is going to be more practical than a handmade one. Especially when, as is going to happen sometimes, the handmade chair is made by a newly started craftsman still full of the glee and arrogance of an inexperienced beginner. Unless you’ve lucked on an experienced woodworker, Ikea’s Kaustby chair is likely to last longer, creak less, and hold more weight. It even comes in three colours. All for much less than the handmade one made by Steve in his garage.

The Ikea chair is almost completely devoid of personality, of course, and mass-producing character is trickier than people let on. Personality and character do happen to be things that a lot of people value in the creative works they consume. That’s one advantage self-publishing has that woodworking doesn’t.

As with indie games, the role self-published ebooks serve in the market is to provide readers with oddball stories they would never find elsewhere. Their purpose is to be unique and individualistic—the idiosyncratic expression of one mind. They’re there to make the books big publishing wouldn’t even dream about. Hopefully, one day my work will rise to the level of being able to incite as much what-the-hell? curiosity as a game where you play an octopus trying to pass as a newly married human father of two. All self-publishers should be so ambitious. 🙂

As a self-publishing project, Heartpunk isn’t going to be about self-publishing in any way shape or form. I don’t expect to comment on self-publishing on this blog at all. (I’ll do that in other venues.) Heartpunk will be about fantasy, sword and sorcery, noir, gender and social issues, aesthetics and design, and all sorts of fun stuff.

The first six stories we’re doing are a sword and sorcery series, Knights and Necromancers, set in a world called Alaentera. It’s already completed, covers and all, and the stories will be published over the next six to eight months or so. I haven’t quite decided on the exact schedule yet.

You can download the first ebook for free on the Knights and Necromancers 1: Days of wild obedience page and, if you like it, you might want to join the mailing list to get a notification email when the next one comes out.

The first book is live on Amazon.com, Amazon.co.uk, Kobo, and iBooks. The Kindle books cost $0.99 because KDP doesn’t let you set the price to zero. Hopefully, Amazon will soon notice that the book is free elsewhere and drop the price to zero.

Let me know what you think.

ETA: I’ve uploaded free MOBI and KF8 versions of the first book for those who don’t feel like spending $0.99.